OF FEAR AND FAITH is a paranormal romance with strong African-American characters. I love that! What I love more is that the African-American side of these characters IS celebrated and yet, it is NOT the end-all/be-all of who they are." Amazon Review 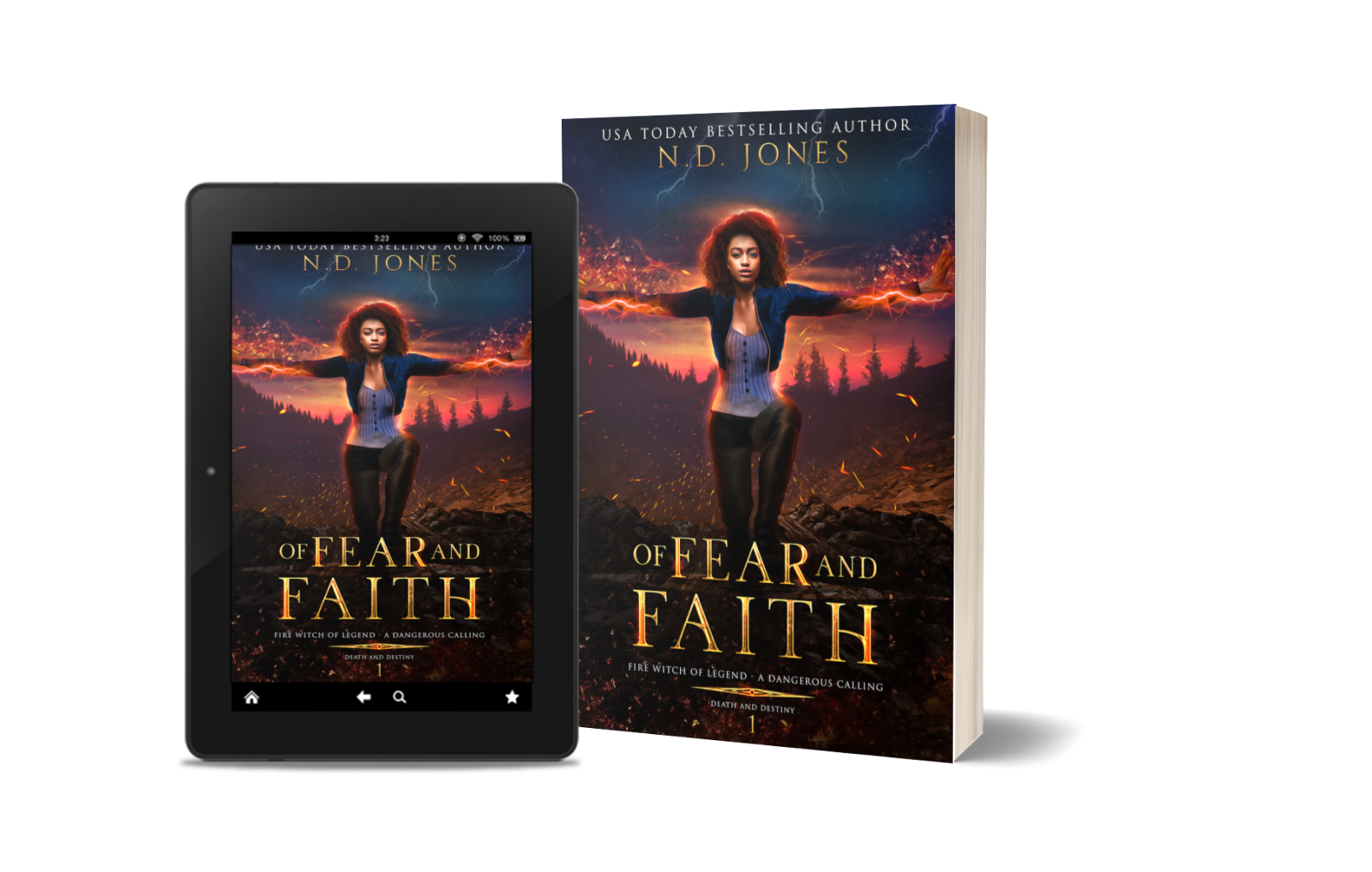 Of Fear and Faith

A thriller of a paranormal romance with mystery, mythology, and suspense.

In a world where nothing is ever as it seems, the seeds of love take root on the precipice of chaos, danger, and a great destiny.

In the shadow of an ancient prophecy, two individuals will be drawn together to meet a dangerous calling--or die trying. For legends tell of a powerful fire witch and a legendary shapeshifter who will one day rid the world of the wrath of the Water Witch of Legend, and restore peace and balance to the world.

However, for Sanura Williams and FBI Special Agent Assefa Berber, their destinies will not be so easily won, as fear and faith will ultimately determine their fates. In the heat of battle and the chill of prophecy, Sanura and Assefa will weather the dual storms of lust and love. Are they prepared for the intoxicating swirl of danger and attraction? Can they overcome their fears of such a powerful prophecy? In the face of their foes, these legendary warriors must embrace their roles as heroes, side-by-side, and defend humanity against the coming doom.

Sanura rushed off the elevator and down a bright corridor with pink, blue, and yellow balloons decorating the walls of the children’s wing, bordering a mural of happy children in a park, the sun above affirming their special place in the world. An illusion, she thought, a beautiful illusion of how life should be for children. The truth, however, rested behind the closed hospital doors, where reality had long since claimed their innocence.

Her heels clicked with each long stride she took, her pace hurried, purposeful. Mike only sought her counsel on cases of a unique nature, counsel that was off the record. And she was late. She hated being late, and Mike would worry. Mike constantly worried. He’d probably already called her mother or Cynthia alerting them to her MIA status.

Sanura made a right onto another colorful corridor. At the end of the glistening hallway sat Mike, cell phone in hand and an all-too-familiar scowl gracing his aging features. As if sensing her presence, he looked up from his phone, and their eyes met. His face softened, reminding Sanura of the soft heart encased within the detective’s tortoise shell of a body.

“I’m sorry I’m late. The beltway was a beast.” She bent to give Mike a heartfelt hug, her long arms circling his taut shoulders.

“It’s all right. I was just beginning to worry about you, but you showed up before I had a chance to call Cynthia.”

“You always worry about me, and I’ll tell you the same thing I told Dad and I tell Mom, I can—”

“Take care of myself,” he finished. “I know, but that won’t stop me from worrying, so you might as well accept it.”

She kissed Mike on the cheek and sat beside him in one of the wooden chairs lining the hallway, conveniently serving as a family waiting area.

“So, tell me about this case of yours, the girl, and what you need me to do.” Sanura leaned back in the chair and crossed her legs, seeking a comfort she knew wouldn’t last once Mike began.

Sanura listened to the detailed, unabridged facts of the case, having already read reports of the slayings in the Baltimore Sun. The gruesome murders headlined every local news program from the early morning news to the eleven o’clock evening news.

She nodded, listening intently to details about Elizabeth Ferrell’s horrific night. While Sanura enjoyed using her training to help Mike, she hated when the case involved children, which didn’t make any sense since she was a child psychologist. Perhaps that was it, she reasoned, as Mike regaled her with one morbid piece of evidence followed by an even more depressing fact. Perhaps it took a person who detested even the thought of an injured child to be such a strong advocate for their rights and protection. Sanura wanted to help those lost souls. No, she needed to help them, free them from their pain, their misery.

So she sat and listened and fought the urge to cover her mouth and squirm in her chair when Mike described the crime scene photos his temporary partner had shown him earlier in the day. And just when she was about to tell him she didn’t need to know the coroner’s findings, a wave of energy slammed into her, shredding her concentration, dissolving all thoughts of the child and the case. The energy rode Sanura hard, forcing her eyes to close, mouth slightly parting, aura open and alert, searching for the source.

With embarrassed concentration, she slowly opened her eyes. And a smiling stranger stood before her, a chilled bottle of water in his right hand.

Their eyes met, and another blast of energy assaulted her senses. She didn’t close her eyes this time and refused to look away. No, Sanura simply absorbed the magical energy, opening her senses and pulling the scent to her. It swirled about her, strong but gentle. And while it should have felt strange, as if her body had been invaded by a foreign substance, it simply felt—right.

The man’s eyes widened, almost as much as his nostrils when he inhaled deeply. Still he only stared, gaze unwavering, eyes sparkling with unasked questions. Yeah, she had questions of her own, like, had he experienced the odd sensation too? Sanura didn’t know. But she had felt it, as strongly as she now felt the heat of his gaze roaming her body, slow and sensual, ratcheting up the indescribable energy between them tenfold. Damn.

Mike stood and placed himself between Sanura and the fine stranger with the most tantalizing aura she had ever sensed. Mike faced the man, his head craned up to meet the taller man’s eyes, a snarl seeping through his lips when he said, “We talked about this, remember what I said.”

Frowning, the stranger gave Mike a hard you’re-not-worth-my-time look before gazing over Mike’s shoulder and at her. His smile returned and settled firmly on her still-seated form. Angling from behind her godfather, the stranger extended his right hand.

Sanura stood and returned the smile. She took the offered hand and shook, trying—futilely—to ignore his unique masculine scent. The scent went straight to all the right places, subtly finding her genetic code and adding his. Impossible. “Yes, it’s nice to meet you, Special Agent Berber. Mike’s told me so much about you.” But not everything. Not nearly.

Next Book in the Death and Destiny Series

Of Beasts and Bonds 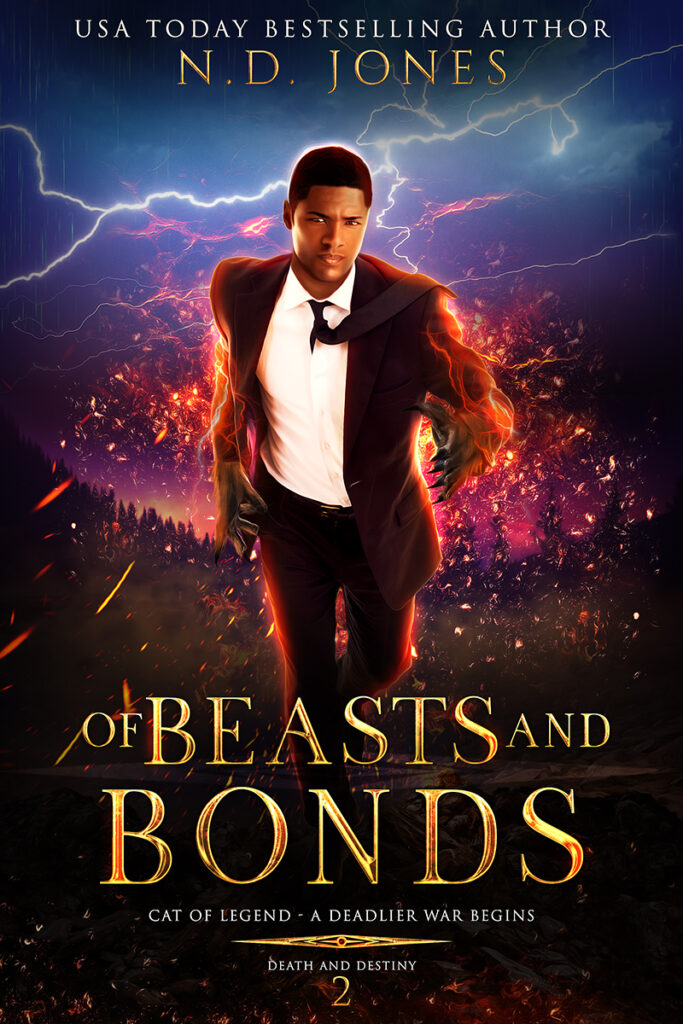